Streaming through a scenic desert canyon, the San Miguel River flows through boulders, deep runs, riffles, and holes. The top half of the property is accessed by a rugged dirt road with trails leading to the river, the lower half from a trail leading from State Hwy 90. When you’re preparing for your trip, make sure you’re preparing for an adventure in rugged terrain. The work you put in getting up and down the canyon will surely be rewarded with rainbows and browns in your net. This property also has a rich past both in modern and ancient history.

Ancient Puebloan people lived and hunted in the area. Tabeguache Cave, a Pueblo dwelling, is in close proximity to the location. There archaeologists discovered corn cobs dating back to the 1st century BC. In more modern history, the property is tied to a very well known historical event. The owner is the Great Great Grandaughter of John Lee Doyle, the Mormon man pinned with the Mountain Meadow Massacre. Here’s what she had to say…

“John Doyle Lee was my Great Great Grandfather and was shot while sitting on the foot of his coffin at the same spot where the massacre took place. He asked not to be bound or blind folded and asked the firing squad members to aim at his heart as to mutilate his body. He left behind many children and grandchildren who loved him dearly and we all still love and respect him with all our hearts.  He first had a trial by government agents who found him not guilty, then later Brigham Young asked him to stand trial again with an all LDS jury and was found guilty. He was then put to death to save the Church from government prosecution. His family remained in southern Utah after he was put to death but were treated poorly by other LDS members.  My Grandfather, Joseph Wood, was married to John D. Lee’s daughter, Nellie Lee, and he took his loss very hard. Granddad Wood then decided he was leaving Utah for good so he rounded up all his cattle and horses and headed to Colorado.”

The Kichelmann property in western Montrose County is the property that Joseph and Nellie settled. This is truly a special place and the owners are happy to share the land and utilize the fishing resources available there. 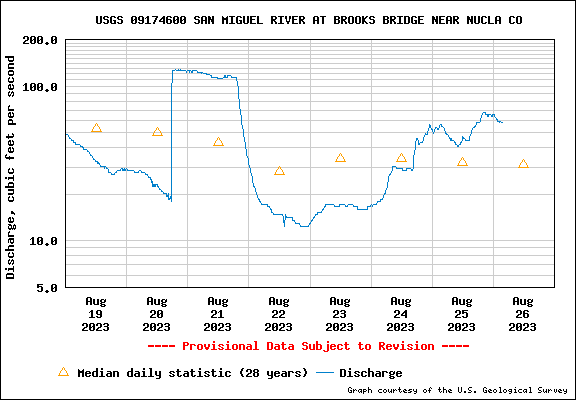 Near Nucla, Colorado, you can find some of the most unique water in the state. In Kichelmann Canyon, you can find over 4 miles of this unique water streaming through desert sandstone. The San Miguel river forms a bright blue ribbon glistening in the desolate landscape. END_OF_DOCUMENT_TOKEN_TO_BE_REPLACED

Want the most up to date info?